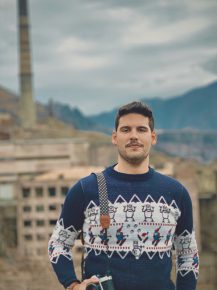 Hagall, ½ of the Creative Director team on First Abu Dhabi Bank, has worked in advertising for nine years across a multitude of brands and regions all over the world.
His advertising career began in 2013 at Grey Brazil, where he had the pleasure of working between offices Rio de Janeiro and São Paulo. This is where he first cut his teeth working for largescale global and local clients such as 3M, Citroën, HSBC, GSK and C&V Retail. Following this, he joined Borghi/Lowe and then NBS/Dentsu Aegis Network, where he began conceptualizing a number of impactful projects for clients such as Oi mobile, Petrobas Oil & Gas Co., GM, Chevrolet, Supercell, Coca-Cola, BR and more.
Hagall then moved to Argentina, joining FCB&Fire and then the LATAM creative FCB headquarters, where he, aside from being cold most of the year, played an instrumental role in creating one of the most popular TV spots in 2018. During his time there, he also worked on global accounts such as RAM, Jeep, Clorox, Fiat, Coke, FCA, Navent, Netflix and Mondelez.
His most recent shift saw him to the warm shores of Dubai, joining JWT as an ACD on the HSBC account, among other brands. In his new role at MullenLowe, he promises to brighten the mood with his sophisticated ideas, art direction and incredibly colourful socks.