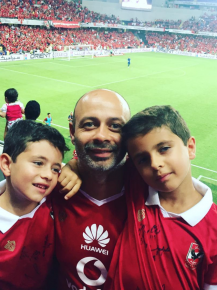 Khaled is the Regional General Manager for Client Service in Mullenlowe, part of the Middle East Communications Network (MCN) which is the leading communications network in the Middle East Region. MCN houses other big names such as Universal Media, Initiative, Weber Shandwick and more.
Khaled’s advertising career started in Egypt, where he worked for a handful of leading global agencies such as Leo Burnett, BBD and Fortune Promoseven, handling a variety of international and regional brands like P&G, Savola Group, Pepsi, PepsiCo and Coca-Cola.
He moved to Dubai in 2005 to lead regional business efforts for Coca-Cola ME and spent the following four years building the brand and gaining market share from the then leading brand in the region, Pepsi.
Khaled’s in-depth experience in media and content creation can be attributed to his time spent working for MBC Group, leading a team and spearheading the marketing for the group’s first locally-focused channel, MBC Masr. Today, MBC Masr is among the leading channels in the Egyptian market. As a result of his valuable contribution to MBC Masr, he was given the responsibility of leading the marketing team for MBC4, one of the top five channels in the region directed towards the Saudi audience, with a special focus on its female viewership.
Khaled has been a part of MullenLowe’s team for over five years. Driven by leadership and compassion, Khaled has succeeded in guiding the Client Servicing Department in developing work for some of the major local, regional and international brands where Khaled and his team played a fundamental role in the success of these brands, helping them each make their own mark on the Middle East.
Driven by an aim to develop the best talents and teams in the industry, Khaled is persistently making efforts to promote a strong culture of collaboration both internally, specifically the Strategic Planning and Creative departments, as well as externally with client partners. He believes that the best quality of a leader is to be human, with this you are able to empathize, inspire and motivate every team and individual in the best possible way.