We're delighted to share MullenLowe MENA has been named 'Agency of the Year' at the Campaign Tech Awards!

MullenLowe MENA was also awarded ‘Best Use of Experimental Tech’ for their ‘ProtectSet’ campaign for Mobily eSports.

“We are extremely proud to have been named “Agency of the Year” at the Campaign Tech Awards. Being the first agency in the region to receive global recognition is significant; it proves that we’re achieving our vision for MullenLowe MENA with our innovative work. We have a dream team, an amazing culture and – most importantly – ambitious partners. We will keep pushing for work that is meaningful and for creative quality that meets international standards. It is a great feeling to see our name among the world’s best, and credit goes to the whole team for working passionately day and night to make us the agency of the future,” says Mounir Harfouche, chief executive officer, MullenLowe MENA.

The Campaign Tech Awards exist to champion collaboration between brands and both the creative and technology communities, and celebrate the outstanding work that this collaboration can often bring about. These awards will reward the disrupters and pioneers within the creative tech world, who are genuinely reshaping the industry. The headline awards – Agency of the Year and Tech Company of the Year – are not open for entry. Instead, they are nominated and chosen by the Tech Awards’ panel of judges of specialists and digital leaders from across the marketing and tech industries.

Agency of the Year: MullenLowe MENA 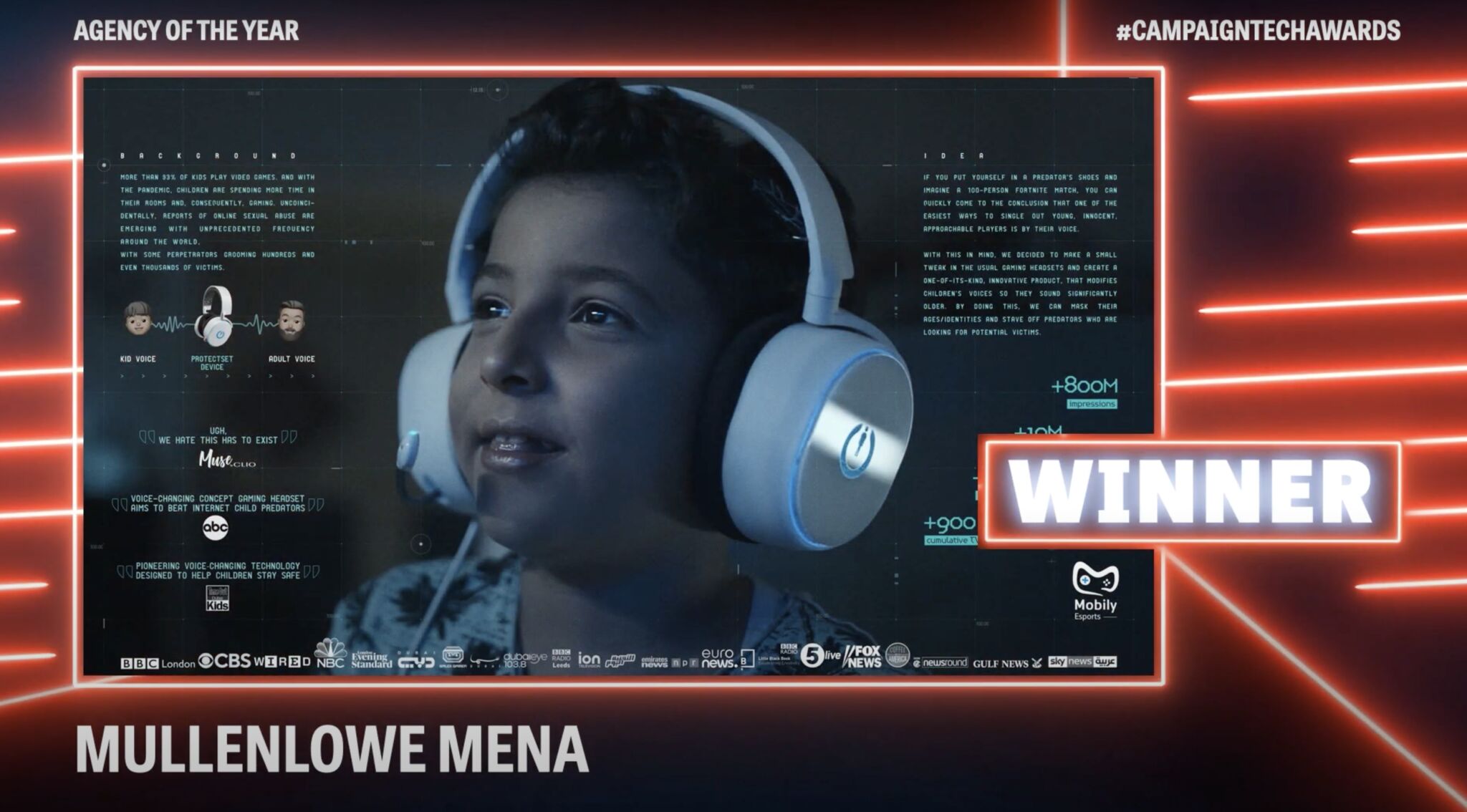 Interpublic agency network MullenLowe MENA displayed an impressive all-round breadth of work to win this year’s agency of the year award, having won one individual category award, be highly commended in another, and make the shortlist for five entries overall.

MullenLowe MENA emerged victorious in the hotly contested Best Use of Experimental award for ProtectSet, its campaign to change gaming headsets for children in order to better protect them online from sex predators. The six-month campaign began by designing and producing 100 devices that were fitted with voice modifiers that made children sound like adults when speaking into them.

This was a “brilliant example of technology helping to solve a real world problem. Simple but effective,” according to one judge. ProtectSet was also shortlisted for the Tech for Good category.

For the Tech for Good category, MullenLowe MENA was highly commended for “The World’s Largest Donation Box”, campaign that aims to provide 1.2 million meals by illuminating a staggering 1.2 million lights on the façade of Burj Khalifa in Dubai. The initiative enabled institutions, companies and the general public to buy lights, for as little as £2 each, to provide vital food aid to those directly or indirectly affected by the COVID-19 outbreak across the country. This campaign was also shortlisted for Best Use of Tech in Out-of-Home and Tech as Part of a Campaign: Charity.

As children spent even more time playing video games during the pandemic, reports of online sexual abuse began to increase significantly. So MullenLowe MENA sought to create a tech solution to start a conversation about how to better protect young people online.

Fuelled by the insight that one of the easiest ways that predators can target young victims is by their voice, MullenLowe made a small tweak to gaming headsets that makes children sound much older.

The six-month campaign began by designing and producing 100 devices that were fitted with voice modifiers that made children sound like adults when speaking into them. After a test phase, the ProtectSet was distributed to dozens of gaming influencers, YouTubers and media outlets.

Within 15 days, the initiative already gathered 800 million impressions, $10m in earned media, over 2,000 media clippings and 900 cumulative TV broadcasts worldwide. Not bad for a campaign that had no media budget.

Check out the rest of the winners on Campaign