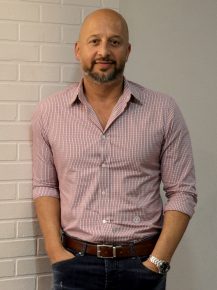 Paul is one of just a few genuinely strategically-minded creative directors that have worked in and won awards across practically every marketing channel. He has held senior creative positions at McCann, JWT, AIS, Agency.com, and WCRS. Over the last 20 years, he has built his fully integrated credentials working in top 5 agencies across Branding, Design, Direct, ATL, Integrated, and Digital. His unique cross-channel experience gives him the ability to deliver truly integrated solutions for any and every marketing challenge.
Paul writes regularly for IAB, Revolution, NMA, and Campaign and has had work published in The Guardian and The Wall Street Journal. He is also a keen public speaker and has talked on a variety of subjects for the IAB, IPA, D&AD, Lynx and more recently as a guest of Double Click in Cannes.
His approach & beliefs are simply (like all the best ads): Look after your brands and your brands will look after the health and the bottom line of your agency. Equally, you’re only as good as the people you hire, so surround yourself with incredibly talented and passionate individuals. A favourite quote of his (that’ll be forever ringing in the ears of the creatives he’s overseen) is that “There’s a big difference between presenting work and selling work,” the latter he’d go on to tell you requires a head for business as well as both creative and strategic nous. A favourite quote from someone else that he firmly stands by is one from Lee Clow, “There’s a real difference between being creative and being a creative – you can’t claim the latter without consistently proving the former.” Which is why he tells his creatives (as well as himself on a daily basis) that you’re only as good as your last piece of work. Finally, and most importantly, he believes that passion will (and always does) trump talent – as talent without passion is nothing.
Ask him what sets him apart from other ECD’s, and he’d say one thing: “I believe there’s a silent ‘C’ in Creative Director that few creatives every bother to stop and think about, let alone understand – The client’s ‘Commercial agenda/responsibility.’ But if you do stop to think about this, and if you’ve got enough smarts to learn to direct it, then the world’s your oyster (creatively speaking). As you’ll know that anyone in advertising, whatever their title is only ever using creativity to serve the real big C in the industry. You are hijacking and packaging the idea of creativity as a tool to assist your client in making money. Forcing yourself to confront this constantly is the only way to be successful.”
Finally if you were to ask him what he’s most proud of he’d say: “The fact that many of the wide-eyed young creatives that I’ve hired and mentored over the years have gone on to work for some of the most creative agencies on the planet, such as Droga5, AKQA and Adam & Eve DDB.”